On season 11 episode 8 of Keeping Up with the Kardashians, Mr. Brainwash got to paint Kris, Kim, Kourtney, Khloe, Kendall, and Kylie like one of his French girls.

Or all of his French girls?

This is a huge deal right now because the style of this painting takes after Renoir, an impressionist painter that people seem to hate. I don’t get why. Maybe I need to take an art history course or something, because I actually really like what I’ve seen from Renoir.

The Kardashian and Jenner ladies wore gorgeous Victorian clothing for the painting, complete with fancy hats and a beautiful landscape in the backdrop.

I’d so love Mr. Brainwash to paint me in the spring so I can hang it in my room!

Watch the episode on E! 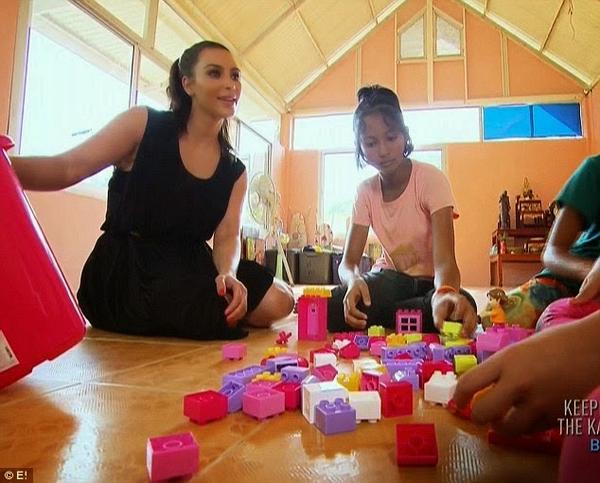 On Sunday’s episode of Keeping Up with the Kardashians on E!, viewers learn that Kim Kardashian almost adopted a girl named Pink while on a family vacation in Thailand.

However, Pink, 12, lives in an orphanage in Thailand where adoption isn’t an option.

When Kim told mama Kris about her desire to adopt Pink she wasn’t too jazzed about the idea. Kris said,

That’s a little aggressive. I think that you can’t just go to an orphanage and fall in love with a child and then take them home like you’re shopping. You get very passionate about things and then you don’t think the whole thing through. I bet there are other things that you could do that would make all the difference in this little girl’s life.

Since adopting Pink wasn’t an option, Kim had no choice but to find “other things” to help the orphan. She decides to bring a few gifts to the orphanage, not only for Pink but for all the children.

Do you think Nori and Pink would have gotten along if Kim was able to adopt her?

Also, congrats to Kim for making it to day 73 of marriage!

It’s officially summer! Here comes the vacations, the parties and all the fun! But those summer activities wouldn’t be complete without a summer playlist now, would they?

Here are 14 fun, festive and relaxing summer songs to add to your summer playlist.

1. Summer’s Not Hot, Selena Gomez and the Scene: What else screams summer better than Selena Gomez literally screaming “It’s summer!” at the beginning of this track? The song is cute and fun, as she sings about the summer not being hot without her guy. Wink, wink.

2. So Many Details, Toro y Moi: This song is part of the chillwave genre, so it has a relaxing beat. The scenery in the video will make you want to take a relaxing vacation in The Carolinas.

3. Let the Groove Get In, Justin Timberlake: For those of you who know how to dance Samba, I envy you, because this song makes me want to dance the Samba. But I can’t do it properly because I don’t know how to. This song is perfect for an outdoor summer party with its festive beat.

4. Ride, Lana Del Rey: I’m not a big Lana fan but I heard this song for the first time during the Pretty Little Liars season 3 finale. It’s one of those songs you would listen to in your convertible with the top down letting the summer breeze take all your troubles away.

5. Move, CSS: Brazilian band CSS, acronym for Cansei de Ser Sexy (I’m Tired of Being Sexy), brings you a cool dance song that will get you moving at this summer’s backyard parties!

6. Trying to Be Cool, Phoenix: Because that’s all we’re trying to be this summer. Pop this French band’s tune on as you try to cool off in the air conditioning.

7. Fifteen (Oxford Remix), Goldroom ft. Chela: I love this song so much that it’s my alarm sound every morning. Chela sings in the first line “It’s been a long time, wondering why the summer smells like sin and wonder.” Indeed it does. And maybe we’ll never know why.

8. Hey Now, Candy Dulfer: What’s summer without a little bit of jazz? This song has the perfect balance of saxophone to make you wanna get groovy.

9. En la Obscuridad, Belinda: In English, the title would be “In the Darkness.” This song is so cute and the video is even cuter. We all know that one mysterious stranger we meet at a late night summer party that we want more from. This song will remind you of him.

10. I Need Your Love, Calvin Harris ft. Ellie Goulding: This mellow electronic song coupled with Ellie Goulding’s fresh voice is the perfect dose of exactly what we need this summer.

11. She Wants to Go, Something like Kites ft. Patrick: Who doesn’t want to go this summer? Here’s another great party song for your party playlist. The awesome guitar chords in this song will make you definitely want to party it up!

12. Como Te Vas, Trails and Ways: This song is from another Brazilian band. The title in English would be “How’s it Going.” The song is sung in Spanish instead of Portuguese. It has a very relaxing summer vibe to it with its smooth guitar.

13. Scratch, BG5: I heard this song for the first time when they were featured on Keeping Up With the Kardashians because Kris Jenner manages the group. The beat of this song is a lot of fun, just the way summer should be.

14. Don’t Stop the Party, Pitbull: Because none of us want this party called summer to end, so enjoy it with Mr. Worldwide’s festive song!

Recently it seems like Hollywood can’t stop picking on the Jenners!

This past week, Kendall Jenner took to Twitter to let go of some steam, tweeting:

“I’d rather be a scumbag than a f–king idiot. Praise high IQ’s, good taste & awareness about the state of the world.”

But that wasn’t all. That tweet has been deleted from Frances’ Twitter, but a few others remain:

@KendallJenner oh ya, not to mention, CANCER, famine, poverty, draught, disease, natural disasters, Death. Fuck, Humans are so self involved.

It is true that Kendall Jenner is better off than most 17 year-old girls in this world.

However, I don’t think Frances had the right to lash out on her like that. We all have bad days when we feel like the world is crashing down on us, privileged or not.

And Kendall used that argument to defend herself.

But Frances still wasn’t having it.

@KendallJenner life is, is completely self serving. It’s asking for attention. If you are feeling like shit talk to someone who you trust

@KendallJenner as opposed to fishing for sympathy from your followers. I don’t know you nor do I think ur a bad person.

@KendallJenner I believe that venting about ones problems via the Internet is a blatant cry for attention.We all have experienced pain

@KendallJenner i try to deal w/ pain in a manner that pertains to my real life not in a way where strangers throw me a pity party.

@KendallJenner To each their own though man. It’s not my life, live it in whatever manner you want to.

Now, here is where I agree with Frances. Too many people have gotten comfortable using social media as an online diary. Got a bad grade on a test? Post in on Facebook. Stuck in traffic? Complain about it on Twitter. Waiter messed up your order? Take a picture and put it on Instagram.

It may not be that you’re looking for pity, but that’s what it comes off as. People will see your complaints and either respond or ignore them.

What ever happened to talking it out with kith and kin?

I’m sure Kendall has a great support system amongst the Kardashian/Jenner family. She can surely vent to one of them.

Hopefully Frances has calmed down about this, though.

Kendall isn’t the only Jenner getting heat. Her mother, Kris Jenner, is being criticized by Sharon Osbourne for “pimping out her children” to make

I think “pimping” is the wrong word here. She helps her children, Kim, Khloe, and Kourtney with their clothing store, Dash, and Rob with his sock collection. Kendall and Kylie are models.

I don’t ever recall her selling them for sex.

Sharon goes on to say that Kris Jenner’s upcoming talk show is “going to bomb harder than Ricki Lake’s one season flop.” She can’t wait for the trainwreck apparently.

Kris fought back saying that Sharon is only clinging to her husband for fame and her show “The Talk” is boring.

I don’t know what’s going with these two but it doesn’t look pretty.

Hopefully these ladies figure things out before words become catfights.

It only took, what, almost two years, right?

The beautiful ceremony that took place on August 20th, 2011 wasn’t that long ago, I suppose.

Yesterday, April 19th, 2013, Kim Kardashian and Kris Humphries settled their divorce. And Kris got nothing from it. Poor guy was scammed into a reality TV marriage with no compensation due to the prenup he signed when they got married. Boo hoo.

As Hollyscoop put it, “Somewhere out there Kris Jenner is sitting in a plastic surgeon’s office and already booking the post-divorce tabloid mag “Tell All.””

I don’t doubt that statement for a second!

I worry about things like this. If the celebrities we look up to can’t even get the whole marriage thing right, where’s the hope for the rest of us?!

The “72 day marriage” joke will never get old though. I promise you. That joke will haunt her for the rest of her life!

So now Kim is both divorced and with child. Let’s see what happens with Mr. Kanye West in the months to follow.