I snapped a pic of this giant eye-shaped subway art at 86th Street on the 4, 5, 6 line last January. The piece is part of Czech-born artist Peter Sis’ Happy City.

From afar, this simply looks like a blue eye, and probably nothing more. However, if you get closer to it, you’ll notice a few intriguing details.

The first fun detail about this eye-shaped art is the fact that it’s outlines with the New York City skyline. In the blue sclera of the eye, there are a bunch of stars shining, which leads me to believe it represents the sky or a reflection of the night sky in a river or something.

Finally, there’s the part surrounding the iris, which features a few animals such as a pig, unicorn, and duck. There’s also a compass in the pupil.

I’m not sure what this all means, but to me it’s a sign to look closely. Things might end up being more than they seem in 2018. 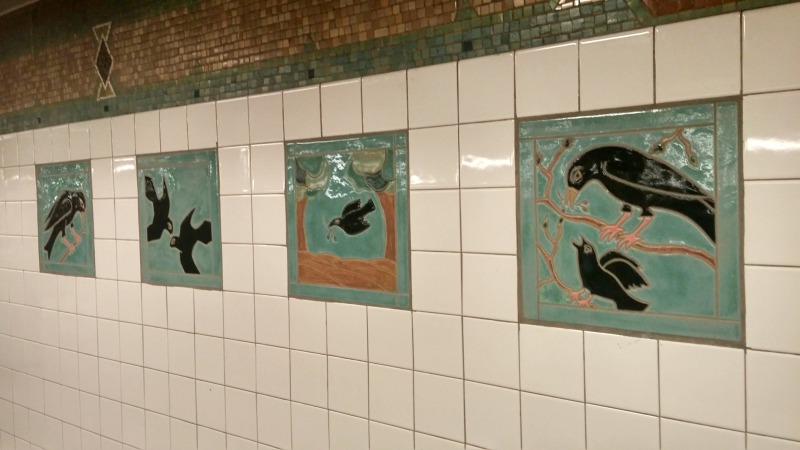 Time for some art from New York City’s underground!

On the way to the gym last month, I saw these gorgeous tiled art pieces by Elizabeth Grajales called A Bird’s Life on the platform of the 1 train at Penn Station.

I was drawn to it immediately because of the soft green color. I then noticed the black birds, which, in any other context, would have scared the daylights out of me. For some reason, this depiction of black birds with their young made them seem less frightful. 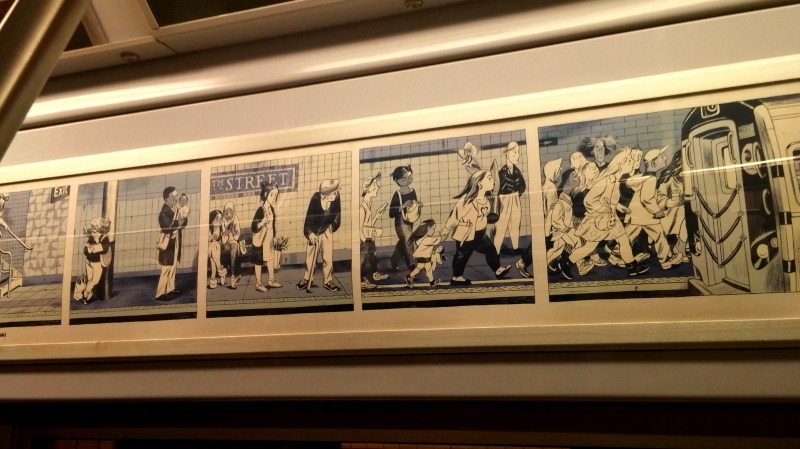 As a New Yorker, I must say, this is a very accurate representation of an NYC MTA subway platform.

I’ve been seeing this art card on several trains, but since the cars are always packed to the brim, I could never get a good photo of it until recently.

Called “Platform,” the art card by Jillian Tamaki features a timeline of a diverse range of people waiting for and then walking towards what looks to be a 1 train at 50th Street. I love the girl holding a plant and hauling a small child with her toy in the 4th square from the left. I wonder if she’s the babysitter or older sister…

If you’ve seen “Platform” and wonder if you can buy it, you can, right here!

NYFW SS17 is in full swing! It’s so much fun just walking around Manhattan during New York Fashion Week and seeing all the fashionable people walking about from venue to venue between shows.

I got off the A train at 104 Street last week on the way to my parents’ house and I remembered Béatrice Coron’s stainless steel cutout “Elegant” from the installation On the Right Track. It’s like the woman in the cutout just walked off the runway wearing that gorgeous gown.

Enjoy the rest of NYFW!

Learn more about On the Right Track.

I didn’t get to see the station art at 111 Street on the A train line until last month. I had honestly forgotten that the station got renovated in general, so it was nice walking onto the platform and seeing Linda Ganjian’s Home Sweet Home stainless steel cut outs on the panels.

What I really love about this is the fact that the design doesn’t end with the house. It continues in a neat border pattern, almost as if the house were being framed.

If you’ve ridden the A, C, or E train to Chambers Street in NYC, or ever waited for one of those trains underground, you’ve probably noticed a bunch of eyeballs staring at you.

I’ve always found these mosaic eyes to be quite intriguing, and it wasn’t until recently while writing an article for Parachute by Mapquest that I discovered these eyes were modeled after 1,200 real New Yorkers. Pretty much all eye shapes and colors are represented in Oculus, which makes sense due to the large group of eyes they were able to use as inspiration.

The collection of eyes is called Oculus, and its a collaboration between artists Kristen Jones and Andrew Ginzel. Roman mosaicist Rinaldo Piras also teamed up with Jones and Ginzel for the project.

It’s interesting to wonder if my eye would have been recreated with or without my glasses had I been part of the 1,200 New Yorkers these eyes were modeled after. 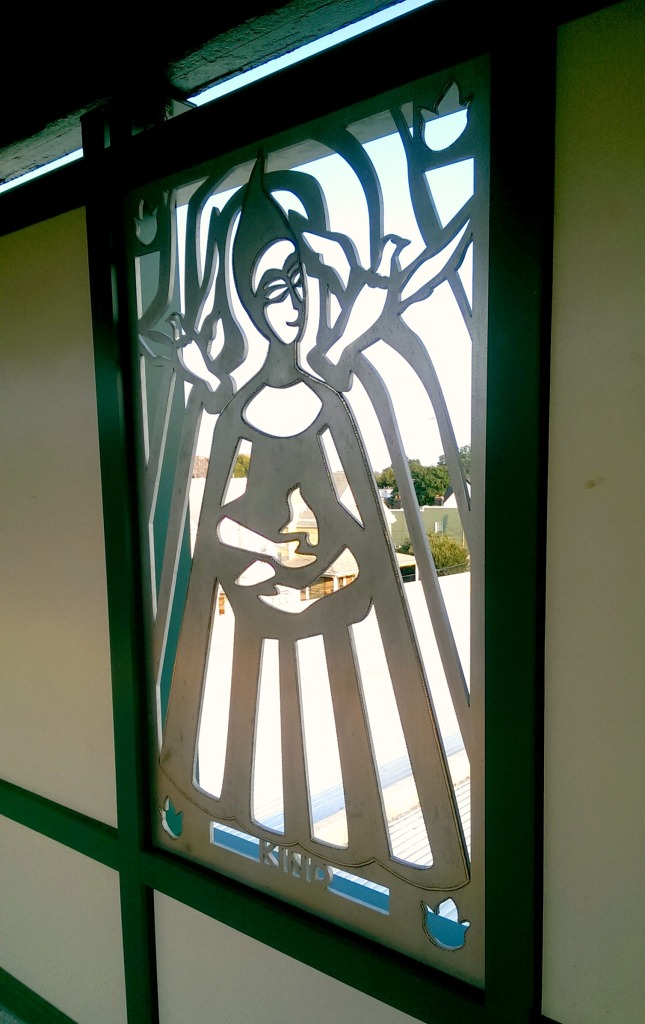 Happy Columbus Day! The 104 Street station on the A line was completely renovated a few months ago, which brought some lovely artwork by Béatrice Coron to the platform.

Coron specializes in cut-out art. 104th Street station features her collection On the Right Track, which is a beautiful installation of human-like figures representing different characteristics such as “happy,” or, in this case, “kind.”

I love the fact that you can look at this piece of art and literally see through it. Looking at “Kind” and seeing the landscape through the carvings reminds makes the artwork seem as though it has a much more deeper meaning. Mother Nature is kind, as she gives us natural resources such as oxygen and water. We can see kindness in the woman represented in this piece of art, and literally through her we can see the gifts that Mother Nature gives us.

I also love the way the woman’s robe blends in with the rest if the carvings, making her seem like she’s floating in place.

The New York City subway is a gallery in itself. The 14th Street A, C, E, L subway station is no exception.

Tom Otterness’ Life Underground is a collection that has intrigued me since I was a little girl. The bronze sculptures are put into some very comical, cartoon-like situations that almost seem human.

This one stood out to me most while coming up the stairs from the L train last Friday. With the latest MTA fare hike, who can blame this guy?

See the rest of the sculptures here. 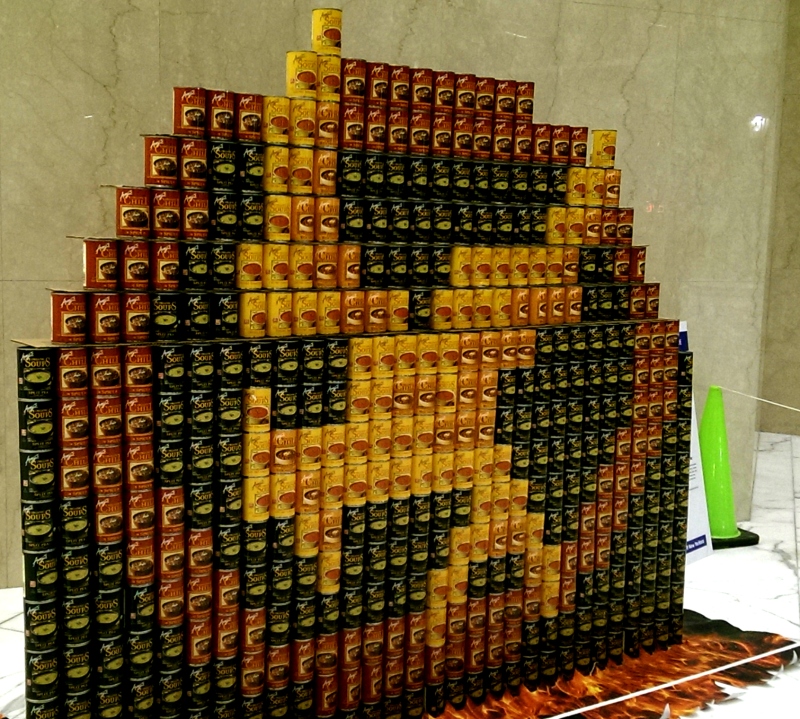 CANstruction, “May the odds be ever in your favor”

Who knew food charity could be so creative!

I was really shocked at how great these were. My favorites are the Hunger Games symbol, the StaTUNA of Liberty (love the word play there) and the NYC subway.

Enjoy some photos of the exhibit below!

1. StaTUNA of Liberty (made with cans of tuna!) 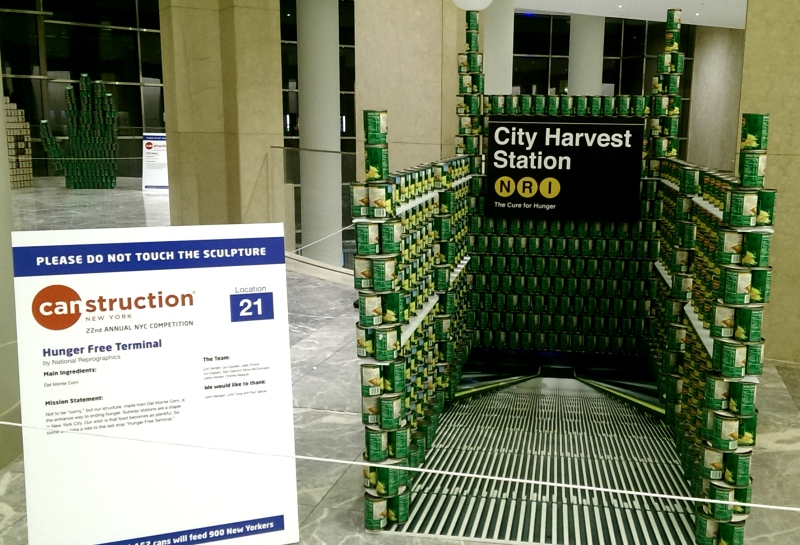 4. Hunger Games (aka “May the odds be ever in your favor”) 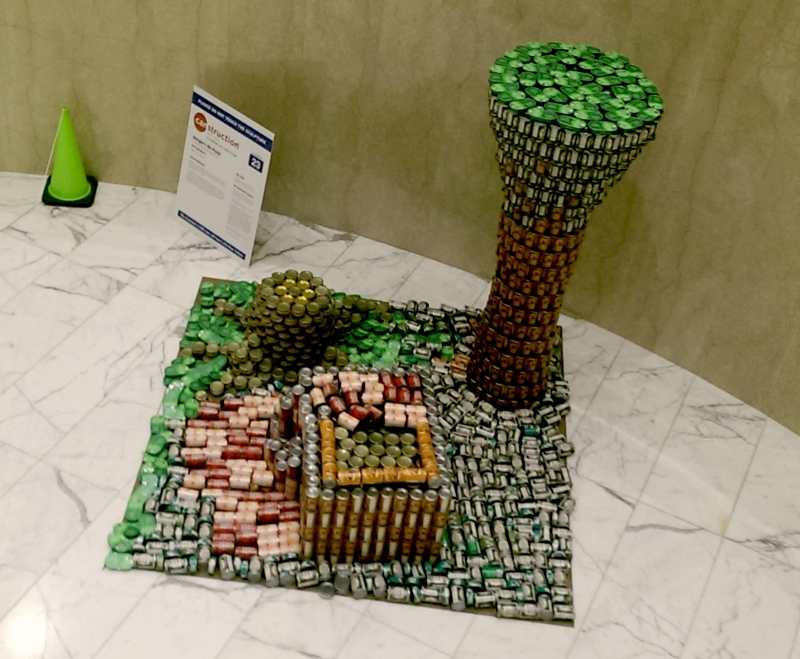 6. End Hunger (made out of Chef Boyardee and Goya cans!) 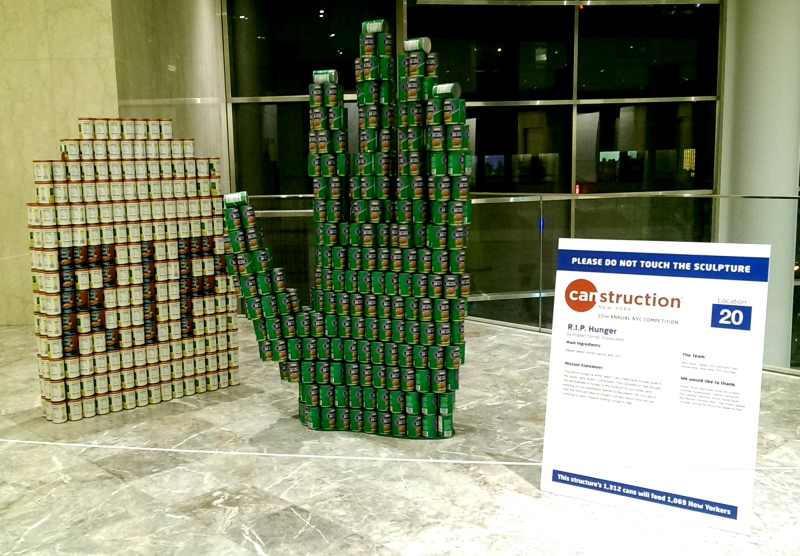 I definitely recommend that you visit this exhibit if you have the time!

Imagine getting off the train at the 34th Street subway station and seeing a bunch of people sitting on benches in white robes and towels.

That’s exactly the scene Improv Everywhere decided to set up on an 85 degree day in NYC. It was 95 degrees underground, which is the perfect temperature for a relaxing sauna.

The crew set up a sauna station on the benches, a water mist platform, and even a hot stone massage.

“That stone treatment is lovely,” said a lady after trying the massage.

Most of the people exiting the trains were utterly confused. Others were amused at the idea and decided to take advantage.

I’d be a bit skeptical of the germs lurking on the subway benches, so I wouldn’t want to sit on them in just a towel or robe.

I would, however, waste no time signing up for that hot stone massage!

The funniest part is the way they packed everything up and left as if nothing ever happened.

How would you react if you got off the train to find 34th Street renamed 34th Spa?

Watch the hilarious video below.