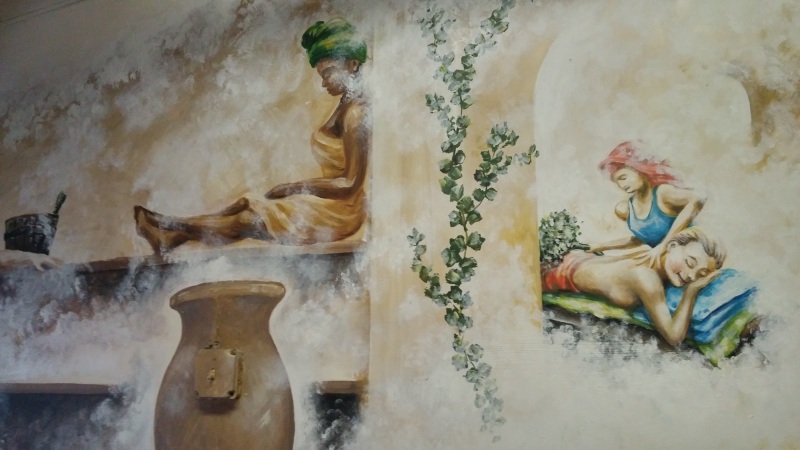 We got our first snow in NYC over the weekend, but I wasn’t even mad because I had a reservation at Russian and Turkish Baths in the East Village.

I went with Karina, who has been to a few other bath houses before the one we went to on Saturday. It was my first time going to a bath house and I must say I thoroughly enjoyed the aromatherapy rooms. It’s perfect for a cold day!

The mural above is on the wall in the hallway outside of Russian and Turkish Baths. I love how the entire painting has a steamy vibe to it, making it look so relaxing and dreamy.

If you’re thinking of going to a bath house or spa in NYC you should definitely check out Russian and Turkish Baths for a couple of hours this winter! 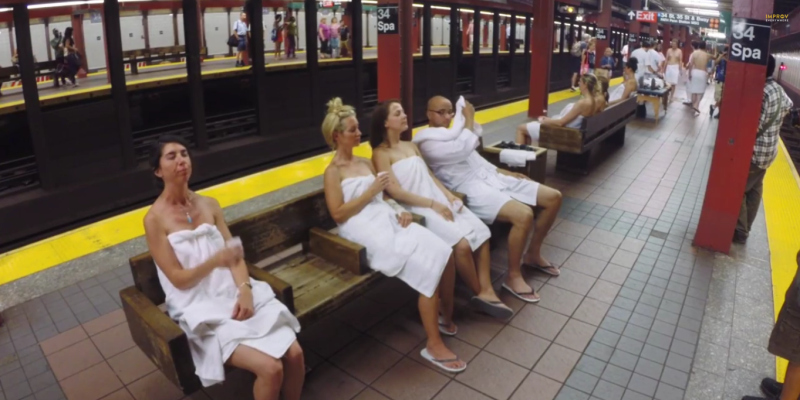 Imagine getting off the train at the 34th Street subway station and seeing a bunch of people sitting on benches in white robes and towels.

That’s exactly the scene Improv Everywhere decided to set up on an 85 degree day in NYC. It was 95 degrees underground, which is the perfect temperature for a relaxing sauna.

The crew set up a sauna station on the benches, a water mist platform, and even a hot stone massage.

“That stone treatment is lovely,” said a lady after trying the massage. Most of the people exiting the trains were utterly confused. Others were amused at the idea and decided to take advantage.

I’d be a bit skeptical of the germs lurking on the subway benches, so I wouldn’t want to sit on them in just a towel or robe.

I would, however, waste no time signing up for that hot stone massage!

The funniest part is the way they packed everything up and left as if nothing ever happened.

How would you react if you got off the train to find 34th Street renamed 34th Spa?

Watch the hilarious video below.