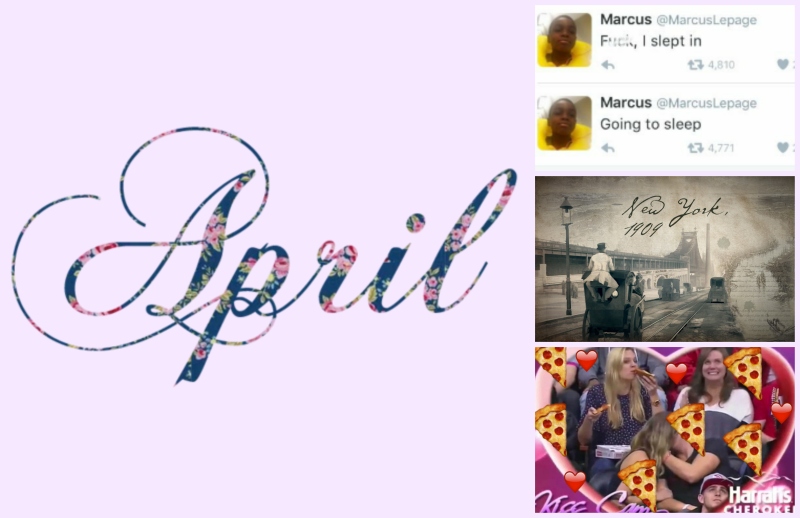 I can’t decide what part of April 2016 was worse: the fact that the whole “celebrities die in threes” turned into fours (Prince, Doris Roberts, Chyna, Victoria Wood), the fact that all the shows I’ve been watching are going on hiatus, or the sad reality that Mother Nature is denying NYC proper spring weather.

Anyway, I managed to get excited about a few albums coming out in May, many of which are being teased with singles that were released in April. That and a few YouTube videos kept me going.

Here are my favorites in pop culture for the month of April 2016:

1. This kid Marcus Lepage took a 7 year long nap. And documented it on Twitter.

2. Alexey Zakharov created a vintage NYC. I think it’s so cool that he was able to do this using photographs!

3. Pizza kisses. Because who needs another human for the kiss cam when you have pizza?

4. Ted Cruz’s twin. I could not deal when I saw the comment that said “Ted Cruz in drag on Maury.”

1. “Coast to Coast” by Satin Jackets. Hands down, this song is part of one of the best albums I’ve heard this year so far!

2. “Better” by Meghan Trainor. So excited to hear Thank You in May.

3. “Let Me Love You” by Ariana Grande feat. Lil Wayne. Girl, you def should not be trippin’ because they sure “will be coming “from the right and the left, left left.”

4. “Guillotine” by Jon Bellion feat. Travis Mendes. Only Jon Bellion can make something as gruesome as a song about getting decapitated sound cheerful.

1. Taylor Swift is tearing it up in this iTunes commercial. And falling off treadmills.

2. Elvy Yost caught Jay Hayden dancing on the set of ABC’s The Catch. He’s got the moves but not the lyrics.

1. Limitless, “The Finale Part 2.” The only good thing that came out of all this is that Piper is safe.

2. The Catch, “The Princess and the I.P.” Let’s just hope Alice’s decision to save Ben doesn’t end up hurting her in the end.

3. Scandal, “Buckle Up.” That Mellie and Fitz moment made this one of my favorite episodes to date.

1. James Corden, Melissa McCarthy and Kristen Shaal make fools of themselves with mouthguards. I lost it with the bubbles bit.

3. Cats on leashes. Poor cat was being dragged down the sidewalk.