Even before the Fall 2013 semester began, there were rumors that Ke$ha would be performing at the Vibe Live concert on campus for homecoming.

I can imagine how happy Hofstra students were when Entertainment Unlimited finally released the full lineup.

As a commuter, of course the first thing that caught my eye that day was all of the cars parked in places that student cars don’t usually park. I was starting to worry that the shuttle wasn’t going to be able to let me exit at Hofstra USA to get my wristband.

The day kicked off with the Parade of Floats, led by Kate and Willie Pride, the school mascots. 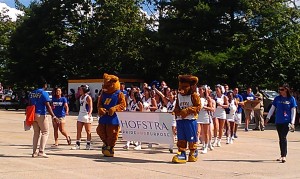 Following them were the lovely cheerleaders, the nominees for homecoming King and Queen, and the movie themed floats. 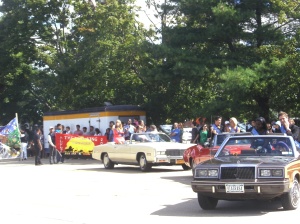 Later on during the festival, Justin Smith of Pennsylvania was crowned King and Rachel Elizabeth of Texas was crowned Queen.

Over on the intramural fields, the 2000 ride caught my eye. My friend Jessica was so determined to ride it as soon as we were allowed to enter at 2pm. 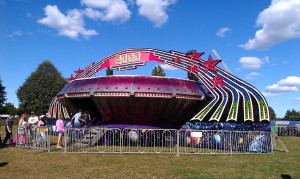 Jessica was the first to start screaming when the ride started to spin around in circles on a different axis after every 20 seconds or so. Chad and Mrs. Johnson were also screaming like mad, and I could not stop laughing.

After 2000, we went on the swings, hoping that we wouldn’t fly out and end up on the south side of campus. 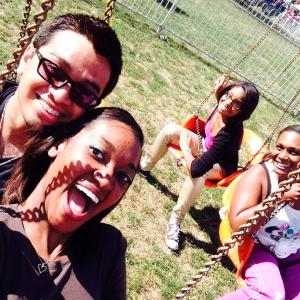 On the Swings
Front (l-r): Chad and Jessica
Back (l-r): Me and Mrs. Johnson
Photo Credit:  Jessica Johnson

If you haven’t already figured it out, they sing covers of Bon Jovi and Journey songs.

The lead singer had some trouble hitting the high notes. At times it sounded as if he were screaming.

Their cover of “Don’t Stop Believing” was very well orchestrated.

Next up on the lineup: Sugar Ray.

Cue moment when everyone born circa 1990 realizes that they’ve probably heard these songs before somewhere.

“You see this ring?” he said right before the band performed “Fly.”

“This is the no fun ring,” he said, referring to the band on his third finger.

I mean, if that’s how you feel after being married to beautician Carin Kingsland for only a year then…

And to the people in the crowd next to Jessica dancing in circles around a folded sweater:

WHAT THE HELL WERE YOU DRINKING? THIS IS NOT A FREAKING MOSH PIT!

After Sugar Ray, DJ Whatever tried very hard to stall until Ms. Kesha Rose Sebert decided she was ready to sing her little heart out for all of us Hofstrans.

The crowd danced to the “Party Rock Anthem” by LMFAO and the ancient folk song “Cotton-Eyed Joe,” circa Civil War.

I stopped the shenanigans when DJ Whatever decided to try to make us dance to “Gangnam Style.”

If you were on a blanket in the grass, I hope you danced. In the crowd, no. I’m not going to try riding an invisible horse when I have fourteen people breathing down my neck in desperation for Ke$ha.

Ke$ha opened her performance galactic style with “Warrior,” the song that she named her 2012 album after.

Other songs she performed included “Crazy Kids,” “Tik Tok,” “We R Who We R” and “Blow.”

Ke$ha Performing “Take it Off”

“You know, I have a fetish,” she said before bringing two ginormous eyeballs out for the crowd. 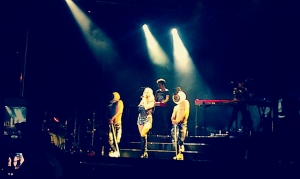 She brought her mom onto the stage during the show, and even filmed some of her MTV documentary, My Crazy Beautiful Life.

Don’t even bother trying to find my face in the crowd when that airs. I’m way to short to be seen in that massive array of insanity.

When I got home that night, three pieces of the red confetti fell out of my shirt.

Way to go guys. I took your mess home with me.

After all the festivities and fireworks, it was time for some serious comedy with Aziz Ansari at the Mack Exhibition Complex.

Yes, the guy that plays Tom Haverford on Parks and Recreation. No, Amy Phoeler did not get up on stage with him.

This guy actually got one of the VIP floor seated members to let him read her text messages.

The bar at Dizzy’s better have paid for that advertisement. Now we all know she invited a guy to one of the three bars on the strip.

On a night when those “girls was loooooooooose!”

If there’s anything I’ll take from Aziz’s comedy show it was this: stop being so rude.

If you meet someone and they take your contact information, what are you going to do when they message or call you?

You can keep making excuses. You can lie to them. You can even get them to actually believe that read receipt you got at 8:49am was a Facebook glitch.

Or you can just be honest.