The music video for “Kangaroo Court” by Capital Cities was released today!

“Kangaroo Court” is the second single off of the Capital Cities album, In a Tidal Wave of Mystery.

If you’ve never heard any of the amazing 80s electro-pop music created by Capital Cities, I recommend you do your ears a favor and check them out.

Although “Kangaroo Court” isn’t my top favorite on the album, it’s definitely a fun song to listen to, with its beautiful trumpet melodies and hard drums.

The video just adds to the fun, danceable qualities of this song!

The plot line for the music video is very interesting, and goes quite well with the lyrics of the song. If I could describe it in one line, it would be, “The story of a zebra who just wanted to have a little fun.”

And no, this is not a zebra as in wildlife zebras. This is a human zebra, who disguises himself as a mustang to get into a club where zebras are banned.

A club called The Kangaroo Court.

There are ten things I love about this video:

2. The synchronization between the drum beats and hand movements (when the zebra knocks on the club door for the second time, and again when Darren Criss bangs his fist on the table at the club).

3. The zebra’s car. He drives a mini cooper. Complete with GPS!

5. The trumpet player at the Kangaroo Court. He’s phenomenal.

6. Shannon Woodward. She looks so gorgeous in all of her scenes, and her dance moves are beyond sexy. (Coincidentally, they get sexier right before the bridge when the female voice sings “I can’t do sexy.”)

Shannon Woodward dancing with the zebra at The Kangaroo Court

7. When the zebra sings in the courtroom,

I commit the crime of wasting time
Always trying to rhyme
Yes, I am guilty
But don’t misunderstand me
I admit defeat, then I move my feet
My history will never be repeated
I won’t ever be repeated.

This is the only time the zebra sings in the video, and its well waited for. Too perfect!

8. The way the the zebra is killed. It was a very artistic move to use red confetti, and it definitely worked. The party vibe of the song continues in that scene even though this part of the video is supposed to be sad.

9. The reference to lions being the “King of the Jungle” during the scene where the zebra is watching a lion prey on a zebra on television and also when the lion is served zebra on a plate.

10. The harp at the end. The beautiful harp melody does not exist in the studio version of this track, but its a nice touch to the end of this video.

Did I mention that all of the characters in this video are human animals?

You’ll have to see it to believe it.

On Saturday, May 4th, 2013 students from Hofstra University treated themselves to the Spring Music Fest.

It was a blast!

There were rides, games, and music, all out on the Intramural Fields. And some crowd surfing. Check out some of the photos on the official Facebook page taken by Jared Cohen!

During the intermissions, students were encouraged to check out the bands at side stage. One of those bands happened to be my buddy Colin Scanlan’s band The Feel Good. The band also includes members Ian Terry, Trever Crist, and Paul Legerme. They did great job. I especially loved their song “LIFE FIGHT.” Check out their music on bandcamp!

My personal favorites were Erin Willett and Twenty One Pilots.

Erin Willett is a 2011 graduate of Hofstra University and semifinalist on season 2 of The Voice. She not only hosted the Music Fest, but she also sang for us. Her vocals are amazing. She literally blew me away with her cover of “Rolling on the River.” She looked stunning in her Festival Style tee.

Before the festival I did not know a thing about Twenty One Pilots.

I’m quite pleased that I now do know of them because they are so good! 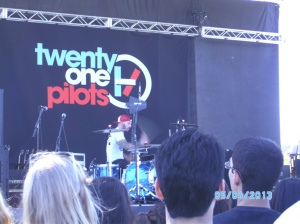 At first I was alarmed by their masks, but then they started to play. Their beats are so catchy, and band members Tyler Joseph and Josh Dun are the cutest (once they take off the masks that is)!

These guys performed some seriously catchy beats including, “Holding On To You”, “Migrane”, “Screen” and “Car Radio.” They even came down from the stage with their drums, assembled in the middle of the crowd, and then played for us! At one point, Tyler Joseph said to the audience, “We’re from Ohio, but today we’re from Hofstra.”

You can be a Hofstran any day, Tyler.

Twenty One Pilots won us all over with their mashup of covers, including Carly Rae Jepsen’s “Call Me Maybe” and Akon’s “Don’t Matter.”

In the days leading up to the concert, my fellow Hofstrans would not shut up about Third Eye Blind!

And they had reason to, because when they played their famous song “Jumper”, I began to realize something: music brings us together. Although everyone had their different motives for going to the festival, at the end of the day, we were all feeling that same bass guitar coursing through our bodies. We were all standing there, huddled up close at lead singer Stephan Jenkins’ command due to the chilly breeze, swaying to the same beat. Somehow in that moment, we were all connected.

Enjoy some footage from the festival! 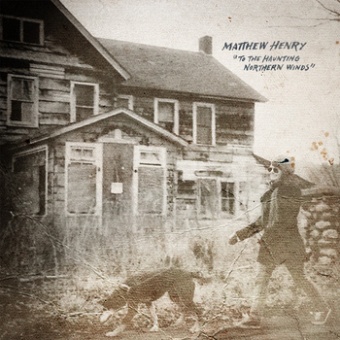 My best friend told me a couple of weeks ago about one of her classmates who has an album. I clicked the link to this digital album immediately after she sent it to me over Facebook, and I was not too disappointed. Matthew Henry’s ‘To the Haunting Northern Winds’ is not the kind of album I’m used to listening to, but some of these tracks are actually quite good.

Right off the back I realized that 20 year old Matthew Henry sounds a lot like Andrew Belle. Any mention of Andrew Belle gets me excited, so those of you familiar with his music might like this album a lot. The genre of ‘To the Haunting Northern Winds’ is mostly folk, with a lot of guitar and banjo chords throughout. Even though some of the songs aren’t as interesting as others, I really love the lyrics for each one. I must say, Mr. Henry, that you write some of the most beautiful verses I have ever read.

Matthew Henry’s got the entire package: the slow, somber voice, the deep lyrics, and the plucking skills that put that banjo and guitar to some serious use!

“Old Hickory”, “Books”, “April and May”, “A Coastal Reminder”, “North Lot Blues” and “Of Grass and Soul” are very heavy on the banjo, making them sound very folk and country-like. The way he strums the banjo in these tracks are sure to get your feet tapping!

“Under the River” is an interesting track. It features the constant beat of a piano chord throughout the song, adding to the haunting lyrics. The drums come in as he sings,

There’s never a better day to remember
Than the minute you first fell in love
The tracks grew
The train was so lovely.

At this point there is a harmony between the one piano pulsing chord and a new melody that sounds like a “lovely” train is indeed approaching. The lyrics in this song are full of imagery, making it all the more haunting.

“Down the Barrel” is unlike most of the other tracks on this album. It’s very slow in the intro, and focuses more on the guitar, giving it a ballad quality.

My favorite two songs on this album are “Juniper” and “South Farm Road”. The lyrics in these two songs are just perfection. The best part of “Juniper” is where he sings,

“Can I have the courage to do what I want to do? Will the junipers remember who I am? Sat down by a river, it gave me everything I need. Can I dance with the white pines in the white light?
Winters a lonely saint.”

The melancholy banjo in this song compliment the lyrics so well.

From “South Road Farm” I really like the part that goes,

“Rusted eyes hold together the oak and caving boards. Turning time into nothing more than fear for the uninformed. Face the door, face the door, there’s a whole life beyond this sunken porch.”

The light piano in “South Road Farm” is so beautiful. I think this song should play during the end credits of an old Western film.

Actually, this whole album could score a Western!