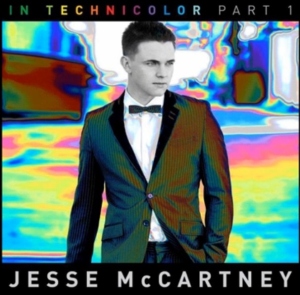 After three years of silence in the music industry, Jesse McCartney is back with his new EP In Technicolor (Part 1), out today, December 10, 2013.

For those of you who are a bit puzzled, the answer is yes, Jesse McCartney is the kid that used to look like this:

Except now he’s 26, his hair is dark brown, and his music has more of an R&B feel instead of the pop tunes he sang back in the 2000s.

In Technicolor (Part 1) is a short EP of four songs, totaling 12 minutes.

The EP begins with the introductory 1:41 track “In Technicolor (Part 1).” The first chorus hits home, as McCartney sings,

Get a job, pay the rent,
Rinse, wash, repeat do it again, oh
We all live in a black and white world
But let’s face it, while time’s wasting,
We’re all here with the same motivation,
Trying to find that someone who sees your worth.

This verse sets up the premise for the song, which is the concept of living a life with the main goal of finding someone to be with as it all unfolds. This person makes your dreary, everyday, black and white world turn technicolor.

“Back Together” and “Tie the Knot” sound very Justin Timberlake, with their funky, upbeat, R&B feel, complete with trumpets and bass guitar melodies.

“Tie the Knot” features some impulsive elope-sounding lyrics. “I’m ready, you’re ready, we’re ready, been ready / Come on girl let’s tie the knot,” he sings excitedly. Is there something you’re not telling us about you and Katie Peterson’s relationship status, Jesse?

The EP concludes on a serious note with “Checkmate,” the only ballad on the album.  “You are gonna lose ’cause you chose to make the moves you make” is the lyric in the chorus that stands out the most.

It’s nice to hear Jesse McCartney’s voice back on the market again. I’m assuming there will be a part 2 to this sometime in the near future?

Please don’t take another three years to release it, Jesse!

Listen to In Technicolor (Part 1) on Spotify.