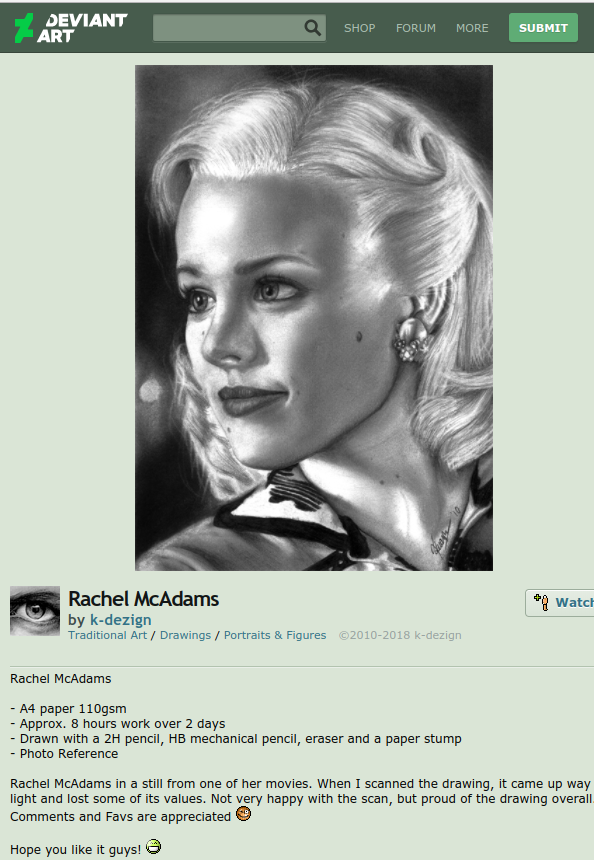 Our favorite Canadian drama actress, Rachel McAdams, is pregnant with her first child!

News of the broke pregnancy on Thursday, and I am so happy for her!

As most probably do, I’ve loved pretty much loved every film I’ve seen starring Rachel McAdams. I think my favorite film she’s starred in would have to be The Time Traveler’s Wife, in which she played Clare Abshire alongside Eric Bana’s character Henry DeTamble.

In light of this baby news, I’ve decided to feature some fan art I found of the actress on Deviant Art by k-dezign. It appears to be inspired by a still of her character Kay Nesbitt in the film Married Life, which takes place in 1949.

I think this black and white sketch captures her essence perfectly. K-design definitely got her on her good side!

See the original fan art here, and check out some more of k-dezign’s sketches of celebs!

When it comes to memorable, cinematic, 21st century romances, Rachel McAdams tends to be quite the lucky lady.

1. The Notebook (2004). For the vintage love that always seemed to get away.
Starring Rachel McAdams as Allison “Allie” Hamilton.
Co-star: Ryan Gosling as Noah Calhoun

Based on The Notebook (1996) by Nicholas Sparks.

2. About Time (2013). For the one who never thought the time was right.
Starring Rachel McAdams as Mary.
Co-star: Domhnall Gleeson as Tim

4. The Time Traveler’s Wife (2009). For the one who can promise you the world when life has no guarantee.
Starring Rachel McAdams as Clare DeTamble (née Abshire).
Co-star: Eric Bana as Henry DeTamble

Based on The Time Traveler’s Wife by Audrey Niffenegger.

Have a happy, safe, and cinematic Valentine’s Day 2015.