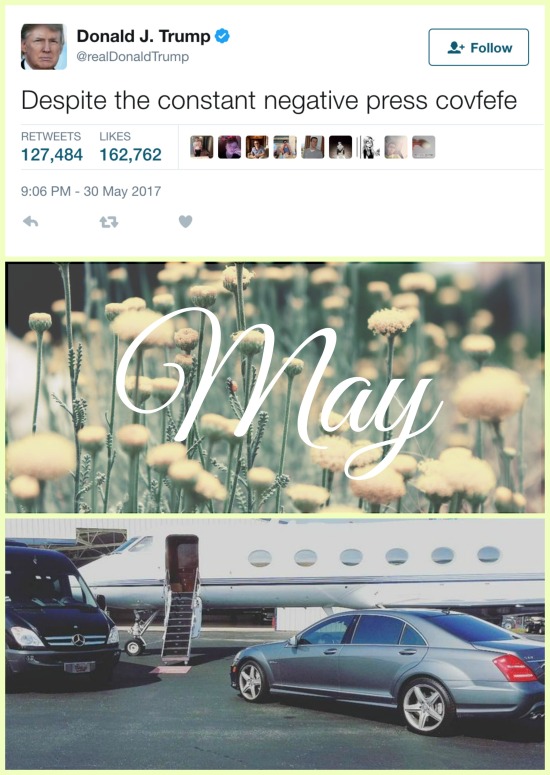 Let’s not even get into how late this Monthly Favorites post is.

May 2017 was a month of laughs. Oh. Em. Gee. I don’t think I’ve had this much fun with pop culture news in a while. We got some awesome music videos during the month of May as well.

1. Donald Trump’s “Covfefe.” The tweet read round the world?

2. Jaden Smith’s hair as an accessory. When it comes to the MET Gala 2017, anything goes.

4. This couple went to prom dressed like the Obamas. YAAASSS.

1. “Passionfruit” (A R I Z O N A Cover).  I might actually go as far to say I like this version better than Drake’s!

2. “The Beach” by Cannons. Summer is comingggg.

3. “Green Light (Chromeo Remix)” by Lorde. Chromeo definitely turned this one into a party!

4. “Balconies (Jorgen Odegard Remix)” by Paper Route. Love the original, and this remix makes me appreciate the lyrics so much.

5. “Disguise” by Day Wave. I so want to see him live but I’m busy when he’s on tour in NYC this month

1. Bellamy Young and Matt McCorry on Lip Sync Battle. I still have to watch this episode!

2. Sutton Foster and the Younger crew. So excited for this to come back in June!

1. The Catch, “The Mockingbird.” I’m still laughing at Carol for asking about getting a wardrobe to go undercover. Like, you’re gonna be in an orange jumpsuit in JAIL soon for who knows how long, my darling. What. Even.

2. Lucifer, “Deceptive Little Parasite.” Because of course Lucifer would attempt to let Trixie drive his convertible…

2. Paramore’s “Told You So” music video. It’s not everyday you get a music video for one of your fave songs on the album.

3. The Japanese House’s “Saw You In a Dream” music video. I couldn’t have asked for a better video to compliment such a heartfelt song.

5. Liza dances like crazy in another round of bloopers. “Get your booty on the floor tonight. Make my day.”