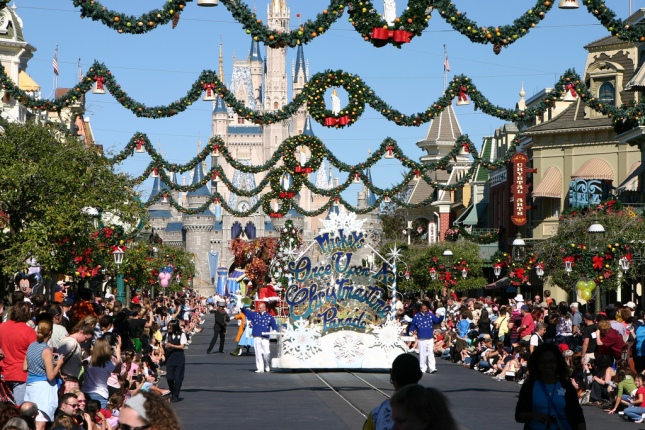 Christmas magic was in full bloom over at Walt Disney World in Florida and Disneyland in California.

Our hosts for the morning were the one and only Neil Patrick Harris in Florida along with Laura Spencer and Nick Cannon in California.

Of, course, Neil Patrick Harris can’t host a show without having his own little dance number, so he kicked off the morning with a routine to the song “Are You Ready for Christmas?” Before the routine, he confesses to the statue of Mr. Walt Disney that it has always been his dream to be at Disney World on Christmas, and he doesn’t want to screw it up. Walt Disney responds, “When you wish upon a star, your dreams will always come true.”

Over in California, Nick Cannon is running late, so he asks Neil Patrick Harris if he can keep singing for two more minutes. Well, you don’t have to ask that man twice!

I’m always afraid of Neil Patrick Harris hosting PG rated shows, because, as we all know, his jokes can sometimes be a bit inappropriate. However, he kept the jokes clean for the Christmas Parade.

Here are some of the funny moments from our hosts Harris and Canon:

1. When Neil Patrick Harris says to Darth Vader “Sounds like somebody’s congested!” Does he want to die?!

2. Harris dons a pair of 3D glasses to watch the floats in the parade. As if anything looks different.

3. When Nick Cannon takes a sip of eggnog and decides its “A little heavy on the egg and light on the nog.”

4. Upon the arrival of Santa Claus, Neil Patrick Harris realizes he has been replaced by Darth Vader and his crew. Clearly they’re out to get him.

5. The end of the show where Harris is on the Jingle Safari with Darth Vader and his crew. After countless lame jokes, Darth Vader manages to choke him without even laying a finger on his neck. Woah.

1. Monsters University Cheerleaders: I can’t get over how adorable those little girl cheerleaders were in their fuzzy green leg warmers!

2. “Let it Snow” by Dove Cameron: I don’t know much about Dove Cameron, but I do know that this girl has the sassiest voice I’ve ever heard on a person of her size! Her dress was cute too!

3. “Baby it’s Cold Outside” by Jordin Sparks and Jason Derulo: These two were so adorable! Jordin showed off her gorgeous curves in a long purple dress that looked absolutely fabulous. Jordin even kissed Jason on the cheek at the end. How cute!

4. “Have Yourself a Merry Little Christmas” by Mary J. Blidge: Mary J. was the morning’s lady in white. She sang her little heart out on stage for us.

5. “Feliz Navidad” by Il Volo: Okay, who are these handsome Italian men, and why have I never heard of them before?! Their baritone and tenor voices are crazy sexy, and I love Gianluca’s sequined blazer!

6. “Let it Go” (Frozen) by Demi Lovato: The vocals were a little flat but Demi still managed to shine on stage with her blue hair and gorgeous statement necklace.

I hope you all enjoyed the parade, and have a very Merry Christmas!