During last night’s episode of Awkward., “A Little Less Conversation”, I decided to test out the Viggle app.

I’ll tell you more about the interactive app later.

This episode was a lot less dramatic than the first two of the season. It begins with Jenna and Matty walking through the halls. Jenna’s voice over gives a brief reminder of the fact that Matty still wants to talk about the pregnancy scare.

Tamara and Ming come to the agreement that Matty’s response “Sure, babe”, to all of Jenna’s requests means it’s over. Naturally, Jenna is now afraid to be alone with him, because she fears that he will break up with her after the talk.

This show really lives up to it’s title. After Tamara, Ming, and Jenna finish having their little girl talk, Becca, the evil Asian chick, walks by. In order to abort her suspicions of any lingering romantic feelings between Fred and Ming, Henry slides onto the bench out of nowhere and squeezes Ming’s boob.

What?! Can you say AWKWARD.?

Becca then proceeds to quiz Ming on Henry’s life, just to make sure they’re legit. Her smarts really come in handy during this scene.

Jenna realizes that the only thing that she can do to distract Matty from wanting to talk is seduce him. Her love arts fail miserably, and she leaves the “sanctuary” in despair.

Meanwhile, Sadie suspected of killing Ricky. The principal and my favorite character, Val, the guidance counselor question Sadie, implying that she must have wanted to get back at him for his manwhore-ish behavior. She reminds them that there are also 300 other girls who would want him dead for the same reason, and therefore she should not be the only suspect.

Jenna and Tamara decide to have a BFGFBFF, a date involving couples who are also best friends, so that Jenna won’t have to be alone with Matty on their date. Apparently Tamara has been dreaming of this date since she was a wee little girl.

As Jenna leaves school, Matty offers her a ride, but she refuses. Instead, she pretends to be walking home with the closest person in range, Cece. As Cece gives her weird looks, Matty “sure babes” Jenna yet again after she tells him she’ll see him later tonight. To that Cece goes, “Dude, you just got sure babed.”

Even strangers know things are going downhill for the couple.

The BFGFBFF date is hilarious. The couples spend almost half of the date in the driveway playing musical chairs with the passenger seat so that Jenna will be forced to sit next to Matty. Correction, “Chinese Backseat Firedrill,” as Matty calls it. “No offense.”

The couples end up playing a game of Charades during the date where Jake and Jenna share a memory in order to accurately guess a movie. This upsets Matty even more.

Tamara then suggests that Jenna go with her to the “bathroom, bathroom, bathroom” to discuss their boy trouble. The clever Tamara gets Jenna to realize that the only reason Matty is upset is because she told Jake about the pregnancy scare before telling her own boyfriend. Simple as that. And how does Tamara know this? “Because I’m a communicater. And a little bit psychic,” she says.

I respect Matty for wanting to be a man and talk it out. Too many people go on with their lives suppressing their anger, which only causes them to take it out on the people they love. I hope that viewers take a hint from Matty, especially those in romantic relationships, because as cheesy as it may seem, communication is key to any successful relationship.

The Matty-Jenna confrontation was definitely sappy, but I won’t spoil it for you. Head over to the Awkward. MTV webpage to watch it when it becomes available if you haven’t already!

During the show I decided to use Viggle. I heard about it during a commercial on Monday evening, so I downloaded the app a few hours before watching Awkward. in order to test it out.

The app allows viewers to check into whatever show they are currently watching by hitting the Viggle logo as soon as the app opens. The app listens to the television as the characters speak in order to determine which show you are watching. Connect the app to Facebook and Twitter to share the check-in with friends and followers.

From then on, Viggle allows you to view the Awkward. Facebook, Twitter, IMDb, Wiki, and Amazon Merchandise pages, all via the app. No need to switch to a mobile browser.

Personally, I don’t find much use for an app such as this one. I’ll be deleting it from my phone shortly, because I don’t have that much memory left for apps.

It is great for those annoying commercial breaks though. Click on the Twitter feed for the show to see the outrageous tweets from fans and even the cast of the show. 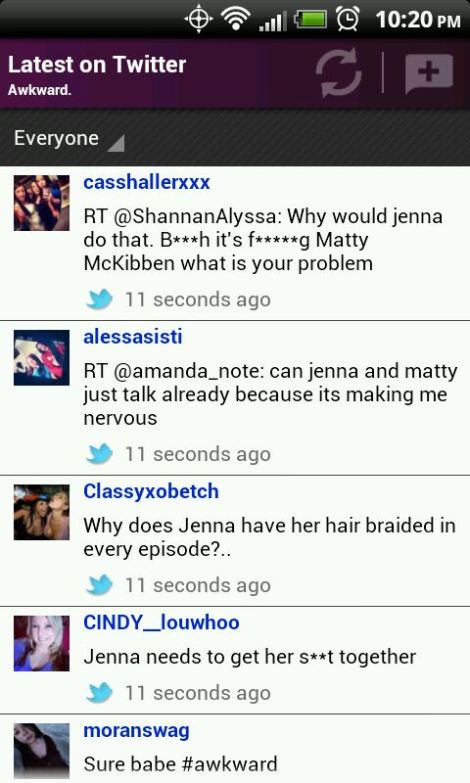 If Viggle decides to integrate this app when Smart TV becomes more popular, it may definitely take off. I would suggest teaming up the app with Shazam, so that viewers can easily find the soundtrack to each episode.

P.S. Did anyone else see Fred the ninja at the end of the episode?!