Guest Blog: 5 Most Inspirational Women in Hollywood by Nicole DaRosa

Hi, I’m Nicole from Glamorously You! I am so excited to be joining forces with The Whisper Box to provide you with some Hollywood-style inspiration. I talk a lot about staying inspired in your life and career on Glamorously You, so it only made sense to add an element of the entertainment industry on top of that for this collaboration! So without further ado, here are the 5 most inspirational women in Hollywood right now.

Ready to take on the #Nashville snow! ❄️❄️❄️#coldshoulder

We can’t talk about women in Hollywood right now without bringing up the #MeToo movement, and Reese Witherspoon has solidified her place as a supporter and activist. During the tidal wave of women coming forward with their stories of sexual assault, Reese bravely admitted that she too was violated by a director at only 16 years old. Since then, she has led the path for other women to come forward and tell their stories through the #TimesUp initiative.

“There are so many great films this year, and to be included among them as a woman means so much… I hope that women of all ages look at #LadyBird and think, ‘I’m going to go make my movie.'" – Greta Gerwig on her #OscarNoms, as featured in @EntertainmentWeekly

Greta is definitely having her time in the spotlight this year, and hopefully it will last for a while. She has become the first women director to have her debut film be nominated for Academy Awards as well as becoming only the fifth woman to be nominated for Best Director in all of Oscar history. Her film Lady Bird has received critical acclaim and is considered to be one of the best films of 2017.

Based on her amazing pieces of work, you would think Ava DuVernay has been in the film industry for decades. Surprisingly enough, her early beginnings were in journalism and public relations! It wasn’t until 2006 that she decided to write and direct her first short film. 12 years later and she has become the first female African-American director to direct a live-action film with a budget of over $100 million! Ava’s story shows us that it’s okay to not have everything figured out at a young age – your destiny will always present itself!

Ohhhh night night! This this is what I would wear to bed if I had a man to sleep with! But I would expect it to be off by the morning! #SHEREADY #flashbackfriday Stylist: @bryonjavar Dress: @josevitorz Hair: @alexander_armand Makeup: @rebekahaladdin Photographer: @eltonandersonjr

If I had to give an award to the biggest breakout star of 2017, it would absolutely be Tiffany Haddish. She was the comedienne that we would all see from time to time in small or guest starring roles, but it was her role in the hit movie Girls Trip that catapulted her to leading lady stardom. Since then, she has starred in her own Showtime comedy special, written a memoir, The Last Black Unicorn, and is set to star in a sitcom with Tracy Morgan and a movie with Kevin Hart. This girl is busy!

I had to give a shout out to one of the many young women in Hollywood who are making a name for themselves right now. Yara is best known for her role as Zoey Johnson on black-ish and its spin-off, grown-ish, but recently we have seen her using that platform to launch herself as an activist. She has a mentoring program, Yara’s Club, and has just launched her latest initiative, Eighteen x 18, which is meant to inspire young people to use their power to vote in this year’s midterm elections. And she’s done all that before she celebrated her 18th birthday!

The past year was a rough one for not only women in Hollywood, but for women all over the world. However, it is times like these that bring out the brightest stars! Which woman in Hollywood is inspiring you the most right now? 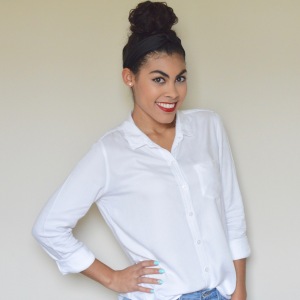 Nicole DaRosa is the founder and blogger-in-chief of Glamorously You, where she helps young women on their journey to becoming their most glamorous selves, inside and out. Through her writing, she encourages readers to feel confident in their true identities, partake in constant self-improvement, and sport a style of their own. Nicole describes herself as a glamorous introvert, lipstick connoisseur, avid journalista, and a lover of all things sparkly.

2 thoughts on “Guest Blog: 5 Most Inspirational Women in Hollywood by Nicole DaRosa”