This Week in Music: Taylor Swift’s “Sweeter Than Fiction” 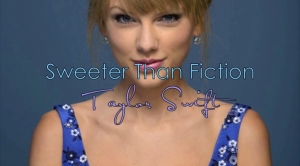 Taylor Swift has a new song featured on the One Chance soundtrack called “Sweeter Than Fiction”!

If anyone is going to write a sweet little song about life, Taylor Swift is your girl for the job.

The film about Britain’s Got Talent winner Paul Potts, directed by Simon Cowell, comes out in the UK on October 25th, 2013.

Luckily, the song “Sweeter Than Fiction” is already out for your listening pleasure.

“Sweeter Than Fiction” is a medium tempo tune with lots of guitar and drum beats.

The intro is a lovely melody of major chords that sound full of triumph and hope.

The instrumentation of the rest of the song is nothing out of the ordinary, but the lyrics are heartwarming.

The lyrics of “Sweeter Than Fiction” take listeners through the doubts and triumphs of success. The second part of the first verse is beautifully written, as she sings,

Seen you fall, seen you crawl on you knees (eh, eh)
Seen you lost in a crowd, seen you colors fade
Wish I could make it better
Someday you won’t remember,
This pain you thought would last forever and ever (Verse 1, Part 2)

The bridge of the song reminds us all why we love Taylor’s voice so much, as the beat slows down a bit and she drags some of the words out legato:

The way the drum takes over in the instrumentation of the last few lines of the bridge brings a nice touch of sentiment to finale of the song, in which Taylor sings the first part of the first verse again.

I hope this song actually plays during the film and not just the end credits.

Or worse: I hope its not just for the soundtrack. That would be a shame to waste such a beautifully written song when it could well be played in the film itself.