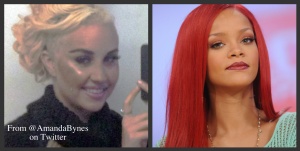 So I guess this is what happens when a child star retires at 26.

Between the head shaving, the dimple piercings, the nose job, the weight loss, and her recent bong-throwing arrest, it doesn’t look like its going to stop any time soon.

@rihanna Chris Brown beat you because you’re not pretty enough

Where did that come from?!

Before this tweet, she wrote, “@rihanna you look so ugly trying to be white.”

Unless I’ve been missing something, I don’t remember any communication between Amanda and Rihanna before these insane tweets.

So this was completely random.

Rihanna did not turn the other cheek on this one.

She tweeted: “ya see what happens when they cancel Intervention?”

Amanda wrote back: “@rihanna unlike ur fugly faced self I don’t do drugs! U need the intervention dog! I met ur ugly face in person! U aren’t pretty u know it!”

These tweets have been deleted from Amanda’s Twitter, but the power of screen capture has salvaged them.

The only logical explanation for Amanda’s seemingly random tweet to Rihanna could be the rumored romance between Drake and Rihanna a few years ago.

It’s still possible that she wants Drake to “murder her vagina.”

Amanda went way too far with this one. Implying that a person deserves to be beaten because of the way they look is very disrespectful.

Imagine if this tweet was sent to a girl with low self esteem issues. This could have driven her to commit suicide.

Amanda’s mental health is clearly not where it needs to be.

Someone needs to help this girl before things take a turn for the worst!