I still can’t get over the shock.

This morning I was mindlessly scrolling through my Instagram feed when I stopped on a collage of photos from peoplemag. The photos were of Glee star Cory Monteith. I read the description to learn that they were posted in memory of him.

What? Cory Monteith is no longer with us? No. This can’t be happening, I said to myself.

I couldn’t believe it. I thought it was some sort of sick joke until I googled it. The reality started to sink in for sure when I saw #RIPCoryMonteith and #PrayforLea trending on Twitter. The top photos on the pray for Lea hashtag are tear inducing.

Lea Michele and Cory Monteith had been dating since early 2012.

I can only imagine the pain his parents and Lea Michele are experiencing at the time.

He was supposed to check out of the hotel yesterday. After staff noticed he hadn’t, they went to his room to check on him. By then it was too late. Paramedics pronounced him dead.

Reports state he was alone when he died. His autopsy is scheduled for Monday.

Cory Monteith was only 31 years old.

Incredibly sad. He still had so much ahead of him.

The Canadian actor struggled with drug abuse and had checked into rehab back in March of this year. He completed his treatments in April and was reunited with his costar and girlfriend Lea Michele soon after.

Couple both on and off screen: Cory Monteith and Lea Michele

Glee fans all over the world are grieving the loss of this awesome actor.

A statement was released early this morning on the Glee Facebook page:

We are deeply saddened by this tragic news. Cory was an exceptional talent and an even more exceptional person. He was a true joy to work with and we will all miss him tremendously. Our thoughts and prayers are with his family and loved ones.

Lea Michele’s rep asks that we give her some privacy during this time.

In midst of all this, we remember that Finn Hudson, Monteith’s character on Glee, never wanted us to stop believing. 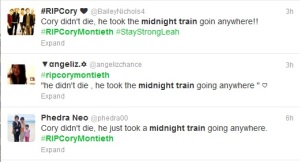 Check out how celebrities are responding to his death.

You will be missed, Cory Allan Michael Monteith. Rest in peace.