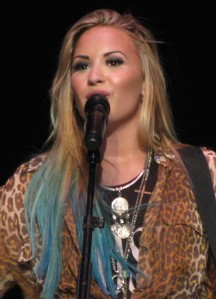 Hold your horses, guys. The photos have not been released.

Not yet, at least.

According to RadarOnline, about 20 nude photos of singer and X Factor judge Demi Lovato have been emailed to the site for sale.

The photos are quite racy, including some nude bathtub pics and a few of Demi topless on a bed.

However, we’re not 100% that these photos are of Demi Lovato.

They do have indicators, though. The tattoo of 12 birds that Demi has on her arm is on the arm of the woman in the photo as well.

The person trying to sell the photos to RadarOnline states, “These are Demi. The collection I have show some nude, including face, some including parts of the body Demi is known for — tattoos, butt, chin. Then, I have pictures of her getting rowdy… I can guarantee you these photos are legitimately of Demi. “

Interestingly, last year, Demi staged a fake Twitter hack prank. In a tweet she wrote, “Demi’s twitter is hacked. Want to see Demi naked? Here it is..” She then posted a photo of a naked Barbie doll with her head photoshopped onto it.

This doesn’t seem to be one of Demi’s pranks this time.

I really hope these photos aren’t real. Demi Lovato and her publicist have not made any comments about this scandal.

If these photos leak, what could it mean for the X Factor season 3?

Whatever happens, it doesn’t look good so far.